The beautifully morbid irony of Ceschi Ramos manifesting an engaging pop song will be lost on some. For those who have been listening closely to the sonic landscape of Ceschi over the years, it will come as no surprise he – alongside Factor Chandelier – was able to once more destroy any attempts at placing a singular label on his musical style and sound. I’ve often heard Ceschi described as “folk rap”, which is certainly applicable but far from all-encompassing. As he continues to step personally into a growing awareness of self and purpose, it would only make sense that his music will be following suit – shifting, evolving and morphing into the most appropriate means of communicating his desired message.

“The Gospel”, which originally found life on Factor’s Wisdom Teeth album, has resurfaced as the second release off Ceschi’s forthcoming Sad, Fat Luck. Hidden in plain sight beneath the saccharine packaging of the pop song is Ceschi’s tragic, authentic and necessary commentary on the opiate epidemic plaguing the lives of countless individuals across America. Finding inspiration from Sam Quinones’ Dreamland, as well as his own experiences and losses, Ceschi paints – in vivid, poetic detail – the deathly impact, both physically and emotionally, brought forth by the opioid crisis.

By presenting his story in the form of a pop song, Ceschi dances with the unfortunate truth that many people choose to ignore a very real crisis that is taking place right under their noses. Often, we don’t want to accept a problem exists – or is our responsibility – until it strikes close to home. “The Gospel” would be as powerful content-wise had Ceschi recited his prose over simple acoustic guitar-based instrumentation, but there’s a far greater chance such a record would fall on deaf ears. However, with Factor’s airy and magical production paving the runway, Ceschi’s lyrics are able to take flight, capturing the attention of a wider audience with his passionate delivery. It’s a tragic irony, but the New Haven-based artist masterfully calls on the sweet, sugary essence of radio-friendly pop records to convey a message rooted in darkness.

The Riley Deacon-directed visual is harlequin, prismatic and psychedelic, the “main” footage trapped beneath trippy, multicolored edits. Interestingly, despite the flashy shape-shifting taking place in the foreground, viewers are still fully capable of deciphering the scenes featured in the “background”. This is similar to the crisis running rampant across America today – regardless of denial or attempts to mask what’s happening, the raw truth of the epidemic can’t be hidden because it’s being felt and experienced by people all over. We can do what we want to paint a pretty picture over death and destruction, but the canvas is still composed of dead friends and family members, loss and a culture refusing to confront the problem.

Ceschi’s Sad, Fat Luck – entirely produced by Factor Chandelier – is scheduled for release on April 4th. You can pre-order the album here.

Press play on “The Gospel” below. 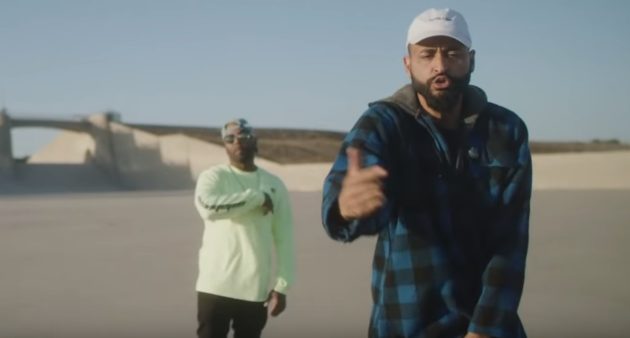