As the Sad, Fat Luck release shows continue to bring Ceschi, Factor Chandelier, a 7 piece band and many friends to cities across America, “Daybreak” comes to life with the release of Ceschi’s latest visual experience. One of the albums shorter tracks, clocking in just under two minutes, “Daybreak” is delivered with a relative calmness, despite the raw emotion radiating from Ceschi’s prose throughout. There is an omnipresence of emotional purge found within the sonic borders of Sad, Fat Luck, and “Daybreak” helps to showcase one of the various ways Ceschi’s self-examination, acceptance, and letting go is manifested on the album. It’s like a sympathetic, warm embrace that juxtaposes wondrously with the explosive nature of some of the albums other material.

Composed as an apology to his former partner, with whom he had spent six years, “Daybreak” serves as an acknowledgment of the difficult journey the two shared together, with Ceschi putting the weight – perhaps rightfully so – on his shoulders. Living the life that he does, juggling his personal well-being – or lack thereof – with the constant travel that comes with his artistry, one can only presume a spectrum of trials and tribulations would arise in any relationship he’s in. “Daybreak” bears witness to this, bringing to light the unfortunately hard to accept truth that, sometimes, love is not enough to keep a relationship going in a healthy way.

And yet, through the sadness and hurt, “Daybreak” is a beautiful and peaceful record. As the lyrics flow from Ceschi, and the instrumentation lightly plucks, strums and rolls along, the listener is overcome with a sense of relief – through the purity of his song, we experience a weight being lifted. “Daybreak” is like a beam of light entering into a void previously enveloped in darkness, as one door is finally shut while a new chapter of life begins.

Directed by Punk With a Camera, the visual experience is haunting, morbid and tantalizingly ambiguous. If ten people were to watch the video and share their takeaway thoughts on what it represents, we might end up with ten completely different concepts. And, as much of a mindfuck “Daybreak” is, this is what makes it such a special piece of art – it awakens the cliche yet honest idea that beauty is in the eye of the beholder. It just so happens that the beauty of daybreak is packaged in eerie mannerisms, enigmatic imagery and death by strangulation.

What I’d like to do now is share my perception of what “Daybreak” represents. Please bear with me, as the video is fucking wild and, I believe, covers quite a bit of ground. I would suggest watching the video first and then reading the words that follow because I don’t want to spoil the content prior to anyone actually experiencing it:

“Daybreak” includes a number of homages to autonomous sensory meridian response (ASMR). Admittedly doing a disservice to the depth of a true definition, ASMR is a method used to calm or relax people through sound. The tapping on the mic, flipping of the Bible pages and Whitney Flynn – who plays the female lead in “Daybreak” – speaking softly during the intro of the video all point towards ASMR. Of course, Flynn’s character seems far from relaxed – quite contrary, she seems unstable and teetering on the edge of her snapping point. Often times in life, we use various forms of escapism to run from our problems, rather than face them head-on and actually deal with whatever shit life is throwing our way. We hide from the darkness instead of taking the necessary steps to bring light to it. No matter how we attempt to run or numb our problems – whether it’s ASMR, religion, or any other method of escaping “real” life – eventually one has to return to the real world. And the harder you run, the greater the weight is whenever it inevitably comes crashing down.

As Flynn drives home, viewers witness her coming back down to reality – she has run as far as she could for the day, and must go back to a beautiful house. Interestingly, of course, that beautiful home does not bring authentic happiness or take away her problems. We see her, almost manic, effortlessly moving through anger, frustration, sadness. Overtime, all her feelings have been buried and thus not dealt with – they have amassed to an unbearable weight within her mental, physical and emotional bodies.

In a frenzied rage, Flynn enters the home and is welcomed by Ceschi, whose resemblance to Brother Love is uncanny. With his literal mask symbolizing something much deeper, Ceschi is the epitome of the romantic cliche – roses, wine, dinner, blowing kisses robotically. He’s doing everything he can to be the perfect lover, putting on a mask in order to force the relationship. While we don’t get a clear answer on what he’s hiding, one is able to pick up on the masked emotions, feelings, etc. Much like Flynn, there is a world of truth being swept under the rug in hopes of salvaging the illusion of “perfection” and happiness. Again, we can put off our truth as long as possible, but in time all the real feelings will surface.

Love is love, but sometimes we rationalize the masking of frustration, anger, sadness and pain in order to keep that love alive. And, in those moments, the concept of “love” is not enough – we love an idea of what could be or what was, no longer in love with what is.

As Flynn officially snaps, she strangles Ceschi until his face is submerged in the soup placed before him. Through the symbolic killing of Ceschi, viewers are able to visualize how what one wants or expects has the potential to strangle another person. We get caught up in trying to be what another wants or expects, slowly killing off the true, authentic versions of ourselves. This holds true in intimate relationships, but also in relationships of all forms. In this case, two individuals made attempts to quiet their truths in order to uphold an illusion-based reality – they were trying to fake it until they made it. But, especially in regards to love, one cannot simply fake who they are and what they are feeling.

We try to protect those we love from experiencing hurt, often at the detriment to our own wellness. We don’t want to be the one to bring pain into their life, so we lie to them and we lie to ourselves. Unfortunately, this slippery slope of inauthenticity prolongs the process, leading to even more pain, hurt and internal/external conflict. If your being honest hurts someone, that’s their process to go through – if their ego takes a hit, that’s on them. And this is not a selfish way of living life, as long as you’re moving from a place of love and letting your truth guide you. Hiding how you feel, or putting on a mask to fake your way through those feelings, will hurt you and them on a much deeper level in the long run.

With the added element of the video, “Daybreak” runs approximately three minutes. In addition to the song itself, the video features the aforementioned intro and an outro with Ceschi. The spectral scene sees Ceschi with his face painted a ghostly white, while his lips and eyebrows are crimson red. Again we see and hear ASMR-related noises, but there’s nothing calming about Ceschi’s baneful voice as he quotes Adam Smith. Relationships in general, but really life as a whole, will require compromise – we need to be careful not to confuse compromise with bargains and deals. It’s one thing to reach an agreement; it’s a totally different animal to sacrifice your truth in order to raise a dying relationship from death’s doorstep. For your sake and the sake of the person you love – even if that love is no longer strong enough to base a relationship around – don’t settle on the illusion of what was or could be.

Sad, Fat Luck is available now on all major streaming platforms and physical copies can be purchased via SadFatLuck.com. I was fortunate enough to catch Ceschi and friends in New Haven earlier this month and I highly recommend you make it out to a show if you can. Tickets for the remaining Sad, Fat Luck performances are available here. 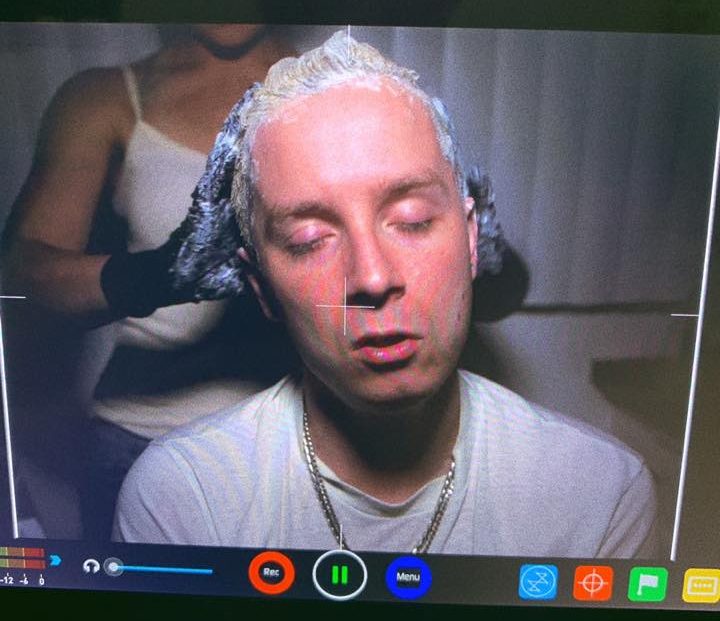 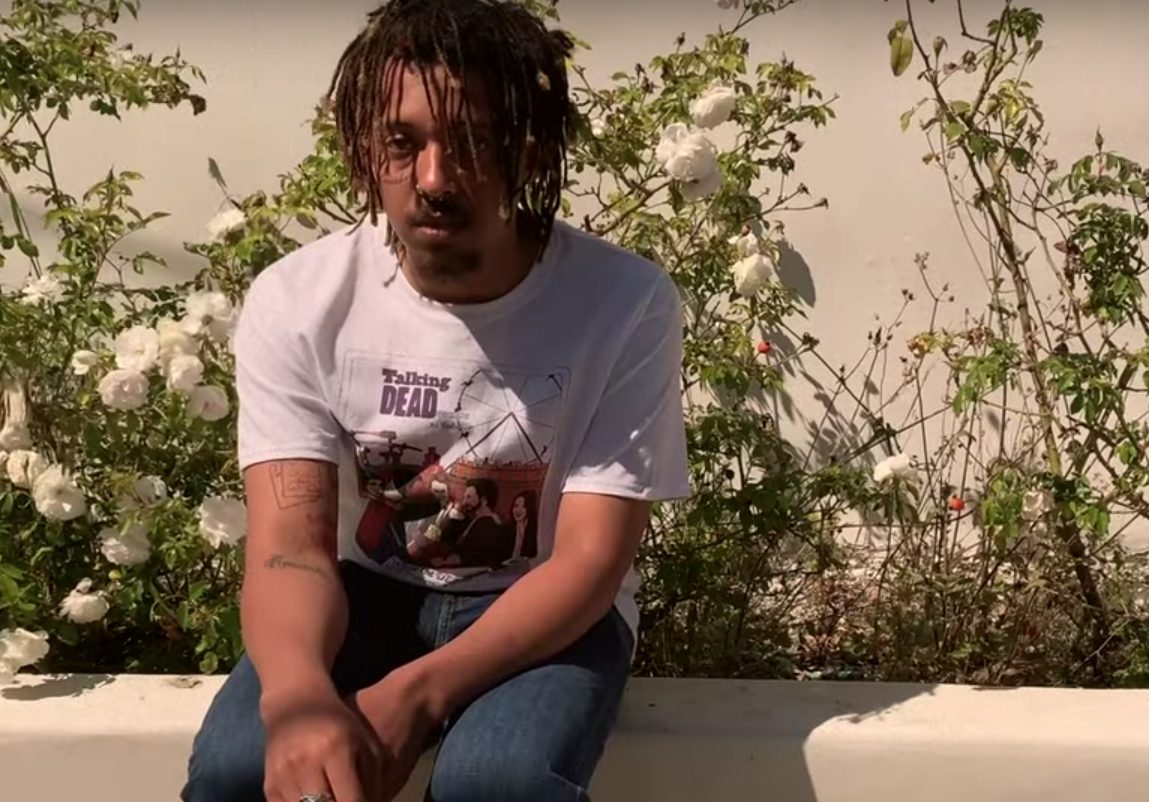